Bilingualism in the Early Years As the fall semester comes to a close each year, we often hear parents wondering if they have made the right choice to enroll their child in a bilingual program. It has been a few months, the kids have settled into the routine, the teachers seem to be teaching and the students are engaged, but what about the language?!?!? Why is my child not speaking in Chinese/French yet?

For most children, it is completely normal and expected that they would not be actively speaking in the new language just yet. Generally, in our experience, most EYC students first start expressing themselves on a regular basis sometime in January or February, though this is very dependent upon the personality of the child. Research has indicated that young learners begin their language acquisition in a “receptive” stage, where they are mostly listening and going through a “silent phase” which then leads to simple words, short phrases, and eventually sentences and more. 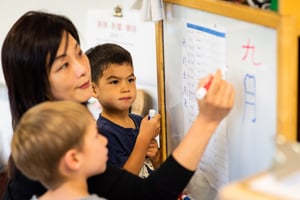 Most children spend the fall listening and taking it all in. Their listening likely eclipses most of the listening we have ever done as adults, unless analyzing language and sound is a part of your job! This is the “sponge” part commonly referred to when people speak about children being sponges when it comes to learning languages and often learning in general. But the sponge is absorbing, not yet squeezing out all it has absorbed. By sometime in the winter, children feel comfortable enough to begin to express themselves more, and you can begin to see some of the extent of their learning. Remember, though, that there is so much more than language being learned - there are aspects of culture, tones of voice, body movements, and so on. It is challenging for parents, however, because so much of this is internal and not something we can see as it happens.

Others will take even longer. Often times these children are more shy, perhaps have a bit of a perfectionist approach to life, and want it to be correct. They might take longer to demonstrate their skills as they want to be sure to have processed and practiced before sharing with others. Often times these children will wait months after their peers, finally speaking in full sentences and paragraphs, not mixing in a word of their home language.

Between these two scenarios is a wide continuum, all of which is normal and expected. Becoming bilingual is a journey, and by 1st or 2nd grade, it is hard to tell which child speaks what language(s) at home, and how long they have been at ISTP. We do notice that those who join us in K are a bit more aware of the challenge, and sometimes need a bit of support transitioning to ISTP, which is why we have Chinese/French as a Second Language support in Chinese and French in PK and K, as well as overall support in 1st grade. Teachers at ISTP are used to and understand the wide range of language ability and know that each child will come to it with the right encouragement in their own time.

The bilingual journey takes a bit of a leap of faith, but if you are ever in doubt, we strongly encourage you to check in with your child’s teachers and/or principal. Our doors are always open to address and alleviate concerns, and work with you to make sure your child is on the right track.