I can't believe how quickly the trip is passing.  Everyone is having fun, and we are doing many exciting things.  Today, we went to Amiens for the day.  We were disappointed when we woke up this morning because it was raining.  On our way to Amiens it continued to be rainy and gray, but fortunately, it was not cold.  When we arrived in Amiens it was no longer raining but was still gray, and we hurried to the Cathedral to meet our guide. 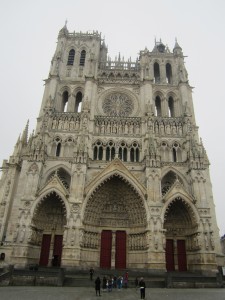 The Cathedral of Notre Dame d'Amiens is the largest cathedral in France.  It measures 144 feet tall.  This number is important because it is 12 times 12, and Jesus had twelve apostles.  The Cathedral is magnificent on the outside with stone statues of the apostles and many saints as well as carvings of the zodiac signs, different seasons of farming, and many stories from the bible.  Our guide explained that a large part of the visit of the Cathedral in Amiens is done on the outside, since the stone facade has so many intricate details and a story that goes along with each part.

It is on the inside of the Cathedral that one can really comprehend the huge size when looking up to the ceiling.  There are many important details on the inside of the Cathedral as well, and our guide carefully explained each part.  The children were particularly interested in the story of Saint Jean-Baptiste who was decapitated.  Displayed behind glass, there was a relic that was supposedly a piece of the skull of the real Saint Jean-Baptiste.  The children were amazed even though it is not certain that it was really his.  We also saw a chapel in the back of the Cathedral dedicated to the memory of the Allied troops that fought in WWI.  It had flags from each of the countries that came to fight alongside the French.

Unfortunately, the Cathedral has very few of its stained glass windows.  During WWI, they were removed in order to protect them.  They were stored in the studio of a man who was in charge of restoring them.  There was a fire in his studio, and most of the windows were destroyed.  At the end of the visit in the Cathedral, we came outside to the sun breaking through the clouds.  We stopped in the gift shop before heading to our picnic lunch.

As we picnicked in a park along the Somme river, the sun came out even more.  We headed to les Hortillonnages, or floating gardens, for our visit.  We split the kids into two groups on two different boats.  I was with the girls group, and they were very interested in everything our guide was presenting, especially since he had a nice sense of humor.  The floating gardens were built on top of a marsh.  There are barges with wooden barriers on which each garden is planted.  Originally, they served as places for cultivated food, but now they are mostly used as private gardens.  There is no electricity or running water on each plot, so the owners only come to spend the day there.  Some of them have plots that consist of mostly water, and they put a fence in the water to block of their property.  These owners would come to fish.  We saw flowers and vegetable gardens along with tiny houses and decorated gardens.  There were many ducks too!  Apparently, it is a lot of work to maintain one of these gardens, and it is necessary for the owners to spend a lot of time there. 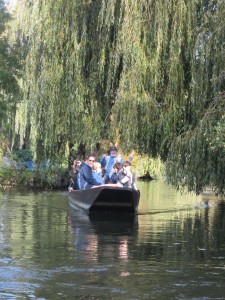 After a wonderful tour of the Hortillonnages by boat, we got back in the bus to come back to Blérancourt.  There was a lot of singing in the bus ride home.  The children got some time to run around in the park and garden next to the Château de Blérancourt before leaving with their host families for the night.