ISTP Goes to the White House

ISTP students grow and become truly remarkable adults. They develop an unparalleled sense of drive and hard work, which can take you just about anywhere – even the White House. From August 2012 to January 2013, the White House was fortunate to have had not just one, but two motivated ISTP alumni in their midst.

“I was one of the two interns for the Office of Intergovernmental Affairs (IGA)”, says Matthew Colford. “The other being Zoe Kornberg- turns out our being placed in the same office was completely random, we didn’t even know we were both working there until the first day!” 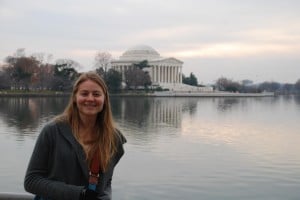 Zoe Kornberg in D.C. during her White House internship.

Zoe says of the experience, “I have never heard of another organization that affords its interns so much responsibility and access. Interns were treated like staff. The White House is an incredibly busy place. In addition to all of the regular business of the Executive Branch, the current events happening on any given day dictated a lot of our work. The response of Hurricane Sandy, the Sandy Hook Elementary School shooting, and the fiscal cliff negations stand out as three priority issues during my time there. I feel very lucky that I got to work in the White House at that time and to see history in the making.”

While Matthew and Zoe worked in the same office, being on different teams meant they experienced these current events through slightly different lenses. Zoe, being on the State team, interacted with governors across the nation. Matthew, who was a member of the Local team, worked primarily with mayors from around the U.S.

When asked about the projects he worked on, Matthew said there was one that really sticks outs to him – Hurricane Sandy.

“When Hurricane Sandy hit the East Coast, our office was responsible for coordinating the President’s outreach to all of the local officials that had been affected, from Michael Bloomberg in New York City to small town mayors in Connecticut. Part of my job was to compile daily updates and summaries for senior White House staff and reach out to many of the towns that had been affected. Things are always running full throttle in IGA, but the destruction that the storm caused really kicked us into overdrive. 12-hour workdays became 16 hours long, with little time for sleep. Thinking back on those weeks immediately following the storm, I ran on pure adrenaline. While it was difficult to deal with a tragedy like Hurricane Sandy on a daily basis, I had never felt so proud to be so tired.”

Both Zoe and Matthew agree that the diversity they experienced and sense of responsible citizenship they developed at ISTP proved beneficial to them during their White House internships. “There were many times,” Matthew says, “in which the intellectual curiosity and openness that ISTP inspired in me pushed me to be passionate about the issues I was working on. I think ISTP does a spectacular job of creating an interest in its students at a very young age to be globally engaged citizens and I certainly feel that serving in government was part of that mission.”

Matthew even commented about the benefits of knowing other languages. His Spanish language skills (which started at ISTP), came in quite handy during a phone call with the office of the Governor of Puerto Rico!

We are proud that ISTP continues to play an important role in the lives ours alumni, but experiences like these can leave their own imprints. To be part of any White House team is an extraordinary opportunity, and has the potential to profoundly affect one’s career choices. 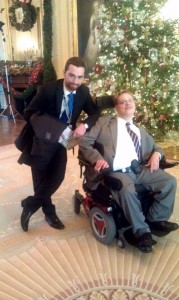 Matthew Colford with his friend and colleague Matt Shapiro from the President's Office of Disability Outreach.

For Matthew, it appears his time in the White House has shed light on the day-to-day politics that run our country. “Heading into the Office of Intergovernmental Affairs, I had just come off an internship at the US Embassy in Morocco and the last thing I was focused on was local American politics. I came to love it, though, and came to realize that some of the most noteworthy achievements actually happen outside of D.C. in a state or local setting.”

Zoe’s experience affirmed her decision to pursue a career in medicine. “Before the internship started, I was afraid that being surrounded by lawyers, I would not be encouraged to go into medicine, but to go into public policy or government instead. I think the internship actually reinforced my desire to be a doctor and to go into public health. It seems to me that people operating in such different spheres as politics and medicine often don't speak the same language, or they speak past each other. We need more people with a foot in government and a foot in industry, so they can bridge that gap.”

ISTP alumni have the ability to do brilliant things in their lives and careers. Matthew and Zoe are just two examples of that brilliance in action.