Today was a great day!  All of the children are happy with their host families as are the families with them.  Although it was chilly this morning, it was very sunny.  We spent the morning at Château de Pierrefonds where we had a guided visit of the restored Château.  It was originally a Château Fort in the middle ages and now functions as a museum.  The chaperones and the guide were impressed with the children's knowledge of all of the different parts of a fortified château.  They knew all of the names and recognized each part on the château.

This afternoon after having lunch at home with their host families, the children participated in tir à l'arc (archery in English) at the archery club in Blérancourt.  They all enjoyed learning the sport, and each of them received a diploma and a souvenir for their hard work.  We were fortunate to have beautiful sunny weather for the whole afternoon, and the children were happy to participate in a sport that they never get the chance to do in the USA.  After they finished, they were given a demonstration from one of the men at the archery club of an arrow shot from 50 meters.  They were quite impressed! 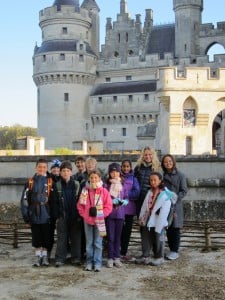