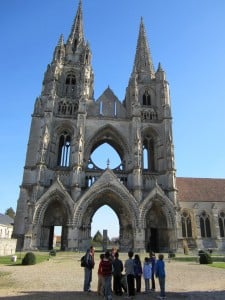 We participated in several fun activities today!  We went to l'Abbaye Saint-Jean-des-Vignes in Soissons where we were met by José, our stone carving instructor.  We spent the morning learning how to sculpt our stones into shapes commonly found in the  Middle Ages.  The students were allowed to choose from four different patterns.  Using mallets and chisels, each child shaped his/her stone according to the pattern.  Then several other tools were used to carve out the inside of the pattern.  They finished their work off by smoothing the stone using a smaller stone and other tools.  They were all very concentrated on their work, and everyone had a great time!  Perhaps you'll see their wonderful work as they as all bringing home a completed sculpted stone.

After having a picnic lunch in the reception area and some time to run around outside in the sun, we were met by Brigitte, our guide for the treasure hunt around the Abbey.  The treasure hunt was set up as if being narrated by Frère Jacques, a novice monk at the abbey, who had left letters to guide the children. Each letter had a clue leading to another part of the abbey where the students found the next piece.  The reward at the end of the hunt was candy, found in the ruins of what was once the abbey's kitchen, and a view of a drawing of what the abbey would have looked like 800 years ago.

We were fortunate enough to also get to try to make coins from the time of Clovis right before leaving the abbey.   The students used a large hammer to pound a metal engraving into another metal engraving that was put inside a tree stump. 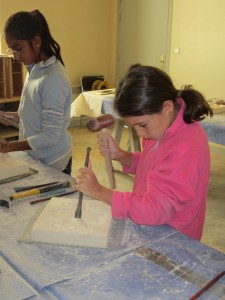 Tomorrow we head to Paris!