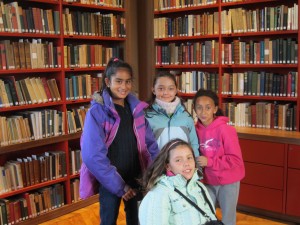 Today was another great day!  We started off in Blérancourt this morning learning about why the USA is so connected to this small village in Picardy.  Madame Dopfer, the curator of the Musée Franco-Américain at the Château de Blérancourt, gave a presentation on the history of the château to start.  It had been completely destroyed and sold piece by piece after the French Revolution, and it was thanks to Anne Morgan, of the JP Morgan family, that the château was saved.  During WWI, she set up a group of American women volunteers to aid civilians in this devastated region.  They built wooden barracks next to the remains of the two front pavilions of the château and used this as their home base.  In 1919, she purchased the Château de Blérancourt to restore it and make it a museum of Franco-American relations.

It was exciting to have a guided visit of the inside of the two pavilions today after learning about the history of the château.  It has been under renovation for several years, but when they started the renovations, they found medieval remains buried underground.  This stalled the work for quite some time as archaeologists worked carefully to uncover the remains.  They have now become part of the wonderful history of the museum, and we were able to see the arches of the bridge that was uncovered.    We were the first group from INTL* that was actually able to enter the museum for a visit, since it has been closed for several years!

In the first pavilion, the students saw the library (just inaugurated September 17th!) that consists of many old and rare books.  It is a wonderful resource on Franco-American relations throughout history and has books in both languages.  Madame Dopfer showed them the amazing detail on some of the older books with beautiful leather covers with gold details.

In the second pavilion, we saw the restored guest house that Anne Morgan created in 1924. The museum has worked hard to restore all of the furniture from that period as well as the lamps and beautiful Chinese motif fabric on the walls.

After lunch with their host families, we went to Compiègne to the Château de Compiègne which was the Imperial Palace for Napoléon III.  We visited the Emperor's apartments and those of his wife.  We then went to the part of the château that now serves as the Musée de la Voiture et du Tourisme.  We saw many old cars from several different periods as well as some of the original bicycles.  We learned that bicycles were first created after the war when there was a lack of horses, since many had died in combat, and people needed a new way to get around.  We ended our visit with a quick stop at the wonderful gift shop before coming home to meet our host families.  Tomorrow we head to Amiens. 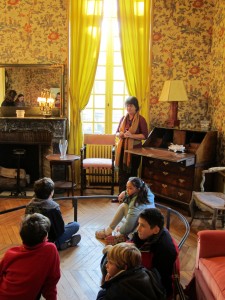