Today, we spent a wonderful day in Paris.  It was a beautiful but very cold day.  The children got up early to take the bus to Paris. We went straight to les Bâteaux Parisiens to go on a boat tour along the Seine.  Despite the cold, many of the children wanted to stay on the outside part of the boat, but they all came in at some point to warm up.  The students were excited to take photos of the many beautiful monuments along the route.

After the trip on the Seine, we went to the Eiffel tower where we met a few family members and an old friend from INTL*. It was a brief moment together, but it was quite nice for some of the children to see family members who live in France.  It was great to see all of our students playing with their friend who now lives in the suburbs of Paris.  His mom mentioned to me that it was as if nothing had changed at all.  How nice to reconnect with family and friends during a quick meeting at the Champ de Mars under the Eiffel Tower. 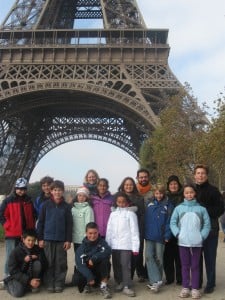 The afternoon was spent at the Louvre museum, where we saw a few of the not to be missed pieces of art the museum displays. There were less people than usual, so we enjoyed spending time in front of Winged Victory, The Oath of the Horatii, The Coronation of Napoleon, Liberty Leading the People, The Raft of the Medusa, The Mona Lisa, and the Marriage of Cana.  We got to sit in a group in front of each piece to discuss, and the children asked a lot of questions.

We then spent a good half hour in the Virgin Mega Store where almost all of us bought books.  The kids who chose their books quickly were patient waiting for the others because they had new books to read.  They were sitting in discreet corners on the floor of the children's section happily engrossed in their books.

Tomorrow is Sunday, so we will get some sleep in the morning, and then each one of us will spend the day with our host family.