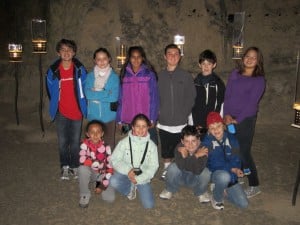 For our last day, we went to the Caverne du Dragon (or Dragon's Lair in English) to visit one of the WWI battle fronts. The Caverne du Dragon is an old stone quarry that was occupied by both French and German soldiers during the war.  It was a strategic point where the troops could be sheltered from the fighting going on in the battlefields just ahead.  Originally, there was only one entrance to the south that opened onto French lines, but the Germans dug another entrance that opened to the north, so that they would have access to the cave from their side.  For most of the war, the Dragon's Lair was occupied by German troops, but the French were able to gain control over it a few times.  During two months, there was even cohabitation of French and German troops: the French on the southern side and the Germans on the north with walls in between.  Our guide explained how hard it would be to be a soldier down in this cave in the dark with bombs and fighting going on over head.  There were several guns and other artillery from WWI on display in glass cases throughout the cave, and there were also bombs, guns, boots, helmets, etc. off scattered throughout the sides of the cave.

After our visit, we had a wonderful picnic on the grass outside the Caverne du Dragon.  It was nice for the kids to have a break from this tragic part of history, and they got to run around and play.

We were met in the afternoon by our second guide, who took us on a tour of the Chemin des Dames.  This is the path that leads through where German and French lines would have been during WWI.  It is interesting that there were battles at this spot with Napoleon's army in 1814 and then again during WWI starting in 1914.  We saw some of the trenches that were left over from the war, and we got to look from on top of the California Plateau (named because of the vines that a man brought back from California to cultivate well before the war) onto what would have been French lines.  Our guide explained the German advantage of being up higher and firing down onto the French, but the problem on the plateau was that all of the water was down below in the valley.  We saw the Former Craonne village that was entirely destroyed during WWI bombing, and we got to walk through it.  It is very hilly with big holes from the bombings with green grass growing on top of where the village once stood. 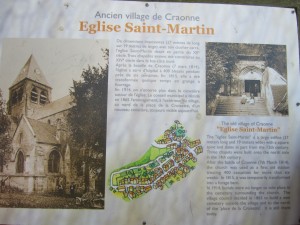 It was too dangerous and too difficult to rebuild the village on the same spot after the war, so a much smaller village was rebuilt just down the road.  We also saw a French cemetery with graves for soldiers of all nationalities who had come to fight alongside the French during WWI.  Last, we saw a Basque monument for all of the soldiers from that region who lost their lives in WWI.  This monument is unique because the statue on it is dressed in civilian clothes looking away from the battlefield towards his home.  He looks sad instead of the typical heroic look that statues on this type of monument have.  It was especially interesting for the students to experience the Caverne du Dragon and the Chemin des Dames because they will study WWI in history class later on this year. 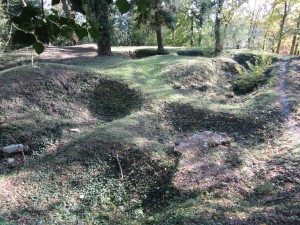 We left our guide back at La Caverne du Dragon and came back to Blérancourt for the last night with our host families.  A few of the children were very excited that their host families were going to make crêpes for dinner tonight!  Tomorrow we meet very early in the morning to get on the bus to the airport.  It will be hard to say goodbye to our new "family" and friends, but we are also looking forward to returning home to our real families.