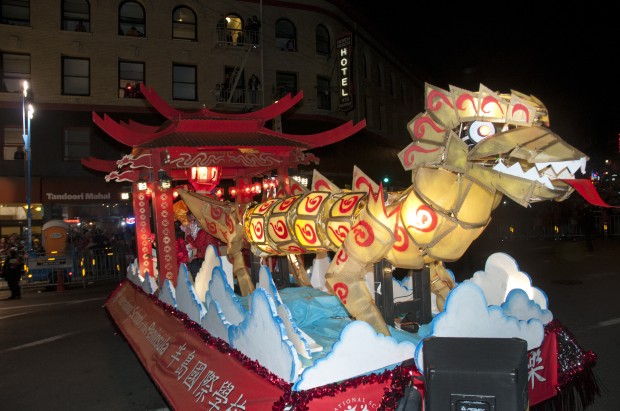 I don't know how many people were able to attend the San Francisco Chinese New Year Parade on February 12, but I just wanted to report that we had beautiful weather, huge crowds of spectators, and overall, another successful parade!  In addition, we hauled the dragon back to Palo Alto the very next day for the CNY performance, and miraculously, the dragon survived the ordeal and performed with virtually no technical difficulties.

The weekend was not without some drama, however.  After we had finished assembling the pagoda and much of the dragon for the parade, we suddenly realized that the wide curved beams of the pagoda might not fit through the doors of the warehouse.  My first thought was "Get the saw", but fortunately cooler heads prevailed.  We manually pushed the float trailer to the doors, and after a lot of wiggling, squeezing, rocking, and bending, we just barely managed to pop the trailer out.  If the doors had been only an inch or two narrower, we would have had to redo literally hours of work.  It was quite an exciting moment. 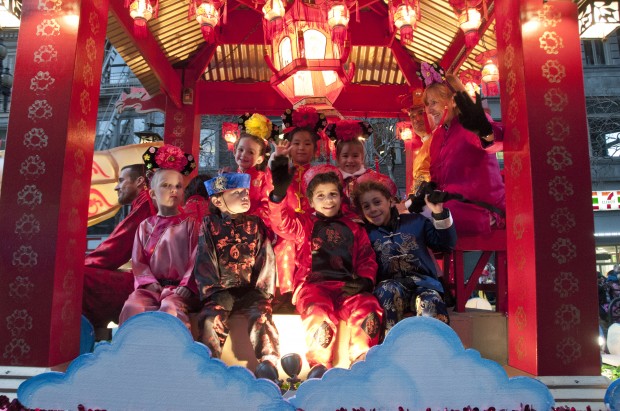 But after that, things went smoothly.  The rest of the assembly was completed in record time, and the parade the next day went beautifully.  We were the only non-corporate-sponsored float this year, and as a result, we had a unique look that drew a lot of attention from the spectators. 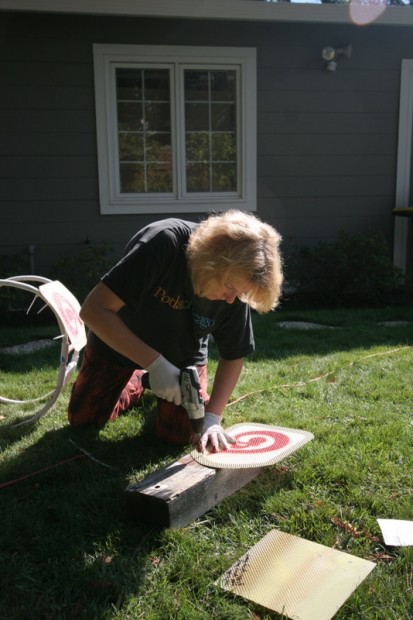 The professional entries may have had some flash, but the the pride that went into our volunteer-constructed and community-sponsored float was readily apparent and couldn't be matched.  To top things off, the enthusiasm from the kids riding the float this year must have been at an all-time high.

So finally, please join me in thanking everyone who pitched in to make the parade such a success.  There was an amazing number of people who helped out this year.  Most of the veterans from prior years were back -- without Gary, the dragon would just be pile of lifeless plastic, and without Lori and Dave, well, it simply would not have gotten finished.  But on top of that, there were so many new faces showing up every weekend, including new INTL families from both the Chinese immersion and the French immersion programs, and even INTL* faculty with their friends and families.  It has truly become a wonderful INTL community tradition which, if anything, is gaining momentum.  It's exciting (and scary!) to think about how high the bar will be raised in years to come. 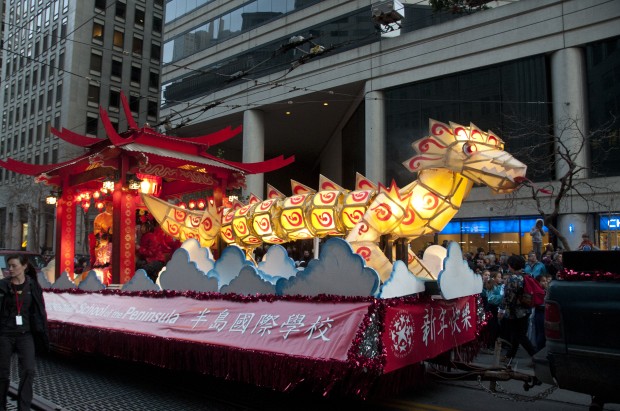 So, thank you everyone for another great parade, and thanks to Philippe, Terry and INTL for the sponsorship and the incredible support.  We've been so honored to be a part of it, and have immensely enjoying working with everyone on this exciting event.