The French Program International Middle School students are on a cultural exchange trip to Meudon, France, outside of Paris. They are staying with host families, attending La Source School, and exploring Paris and its environs. Middle School Principal Barbara Greiner is accompanying our students, and she offers a glimpse of their adventures. 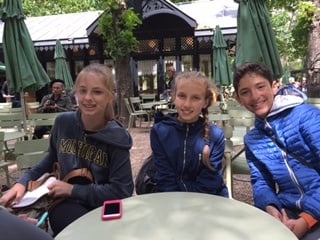 Day 1: We have landed in Paris safely. The students were wonderful during the entire trip. They were warmly welcomed by their French families, and are now spending the afternoon with them. They will start their first day at school tomorrow.

The weather is overcast and rainy, but not too cold.

Day 2: Today, students spent their first day of school at La Source. After a busy morning in class, they had lunch in the dining hall with me. The lunch menu was good: a carrot salad, meat with gravy and pasta, and yogurts and cakes for desert. After lunch, they had a long recess (half an hour), before going back to class. 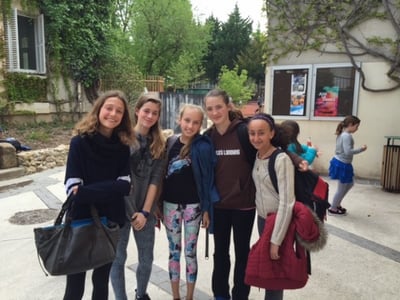 They all reported spending a good Sunday with their host families, and a good morning of classes at school. They also said that they slept quite well, but that they feel tired today.

The weather is warmer than it has been in France recently. As you can see from the pictures, there is even some sun!

Day 3: Today we had a very nice and busy day in Paris. We took the train and the metro to Saint-Michel. From there, we walked to Notre-Dame. We visited the cathedral, one of the finest examples of French gothic architecture. We admired the details of the statues and the stained glass windows. 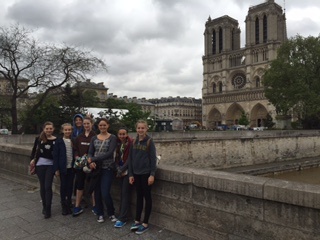 Then we went to the Conciergerie, which was the castle of the French kings during a good part of the Middle Ages, and was later a prison and the site of the infamous Revolutionary Tribunal during the French Revolution. We admired the first clock in Paris, and the beautiful gothic architecture. We also learned a lot about the French Revolution and the guillotine. We visited a reconstruction of the cells of revolutionary prisoners, including the cell of Queen Marie-Antoinette. Then, we proceeded to walk up towards the Palace of Justice and the Sainte-Chapelle. Since it was raining, we decided to stop in a nice typical Parisian brasserie, and had a delicious and abundant lunch. 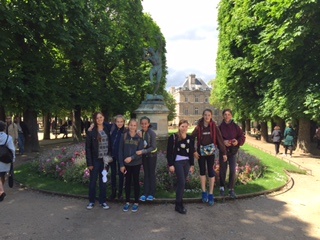 After lunch, we walked up the boulevard Saint Michel, along the 3rd century ruins of the Roman baths of Cluny. We saw the Sorbonne, and its courtyard. We then went to the Panthéon, an 18th century church with a dome, modeled after the Pantheon in Rome. It has been transformed into a crypt where distinguished French citizens are buried. We visited the crypt, and stopped in front of the tombs of Marie Curie, Voltaire, Rousseau, Victor Hugo and Jean Moulin. 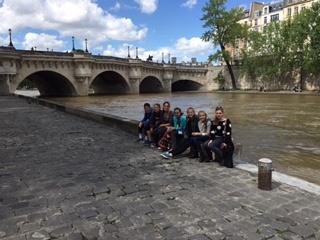 We then walked in the Garden of Luxembourg, one of the biggest public parks in Paris. We admired the palace of the French Senate, a 17th century palace built by the French queen, Marie de Medici. We had a nice tea in a lovely tearoom in the park. We ended our day by walking along the Seine towards the oldest Bridge in Paris, the Pont Neuf.

Day 4: Today we spent a second very busy day in Paris. We took the train and the metro to the area near the Opera, and started our day with a nice breakfast of hot chocolate and tartines. We then visited the Opera, and saw the huge staircase, the ballroom, and the beautiful auditorium with a dome painted by Marc Chagall. We also saw an exhibit of opera/ballet sets, and costumes.

From there, we walked down Rue de la Paix towards Place Vendôme. We stopped there to admire this beautiful 18th century square, renowned for its deluxe hotels such as the Ritz, and for its Vendôme column erected by Napoléon to celebrate his military victories.

Next, we proceeded to walk up Rue de Rivoli along the Jardins des Tuileries. We admired the view on the Place de la Concorde, the Palace Bourbon (the French Parliament), the Obelisque, and the Invalides. 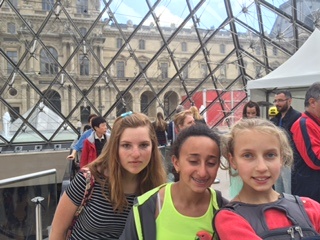 We stopped at Rue de Rivoli to eat in a nice restaurant facing the Jardins des Tuileries. After lunch, since the weather was nice, we walked towards the Louvre, where we saw the Cour carrée and the glass Pyramid. We ended our day by admiring the foundations of the old Louvre, which used to be a 13th century medieval castle.